Germany is a great and large country with lots to see. We only spent 1 night! Tick. Been there – seen it – done it.

The reason we stay so little as we only have a limited time on this trip and too many places to stop and see friends. For Germany, we focused on seeing Aey’s family in Darmstadt.

Before we start the trip to Germany, if you want to see the other locations that our family and the Alfa Romeo made it to. Here they are:

Here is a map to remind you where Darmstadt, Germany is located. 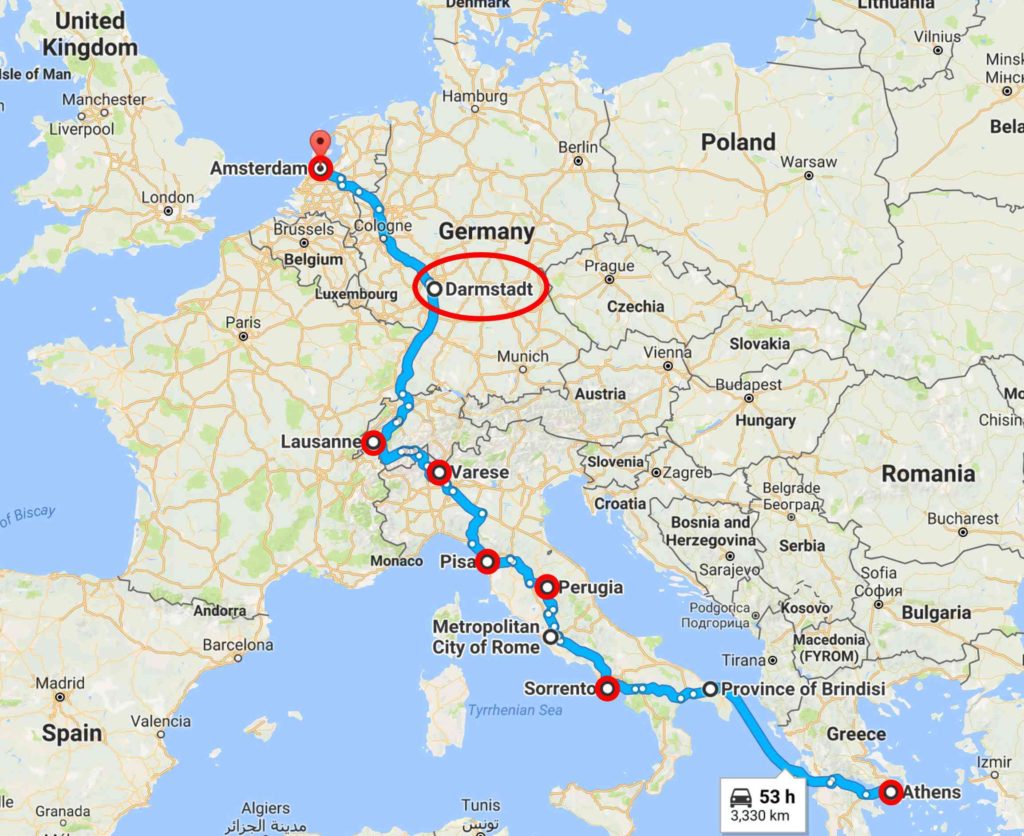 The drive from Switzerland was uneventful, except for a hitchhiker that approached me at a petrol station and wanted a short ride ‘just across the border, to Germany, as I want to go shopping there and it is cheaper’. The border was only 5 minutes away. I said ‘heck yeah’. Aey looked me like I was crazy. I did ask if he was a murderer, and he said no. We got to the border, and the German border guard made us stop, and said ‘great car’ and waved us on. 2 minutes later the passenger said ‘you can let me out here’, at an exit with nothing around. Aey said I smuggled a guy across the border. I prefer to think I helped him save money on his shopping.

The only thing I wanted to see in Germany was the Porsche Museum in Stuttgart and it was right on the way! I then looked it up on a website and noticed that they are open 6 days a week and closed on Mondays. Ohhhhhh darnnnnn it is Monday! As you can imagine, I grumbled about this for a few hours. Of all days, they close on a Monday? Sunday, easy to imagine – but a Monday? 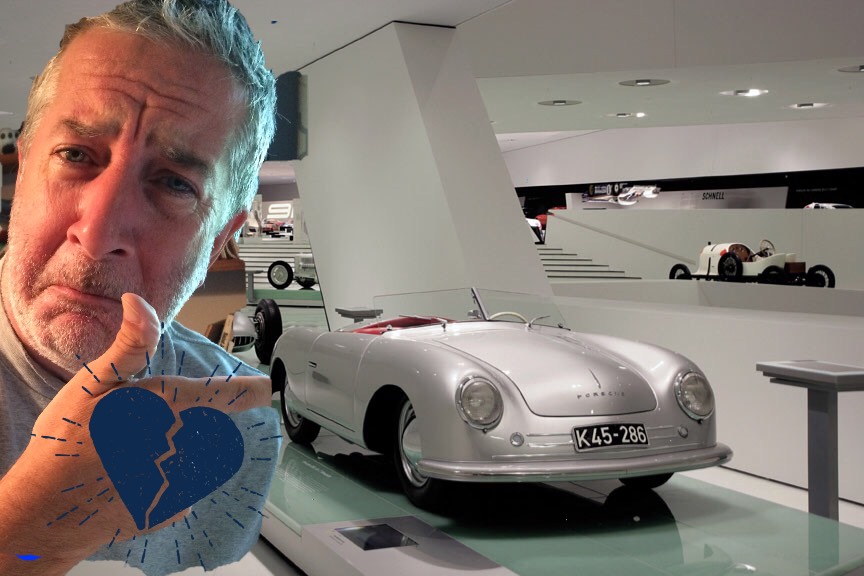 Heartbroken I did not make it to the Porsche Museum. 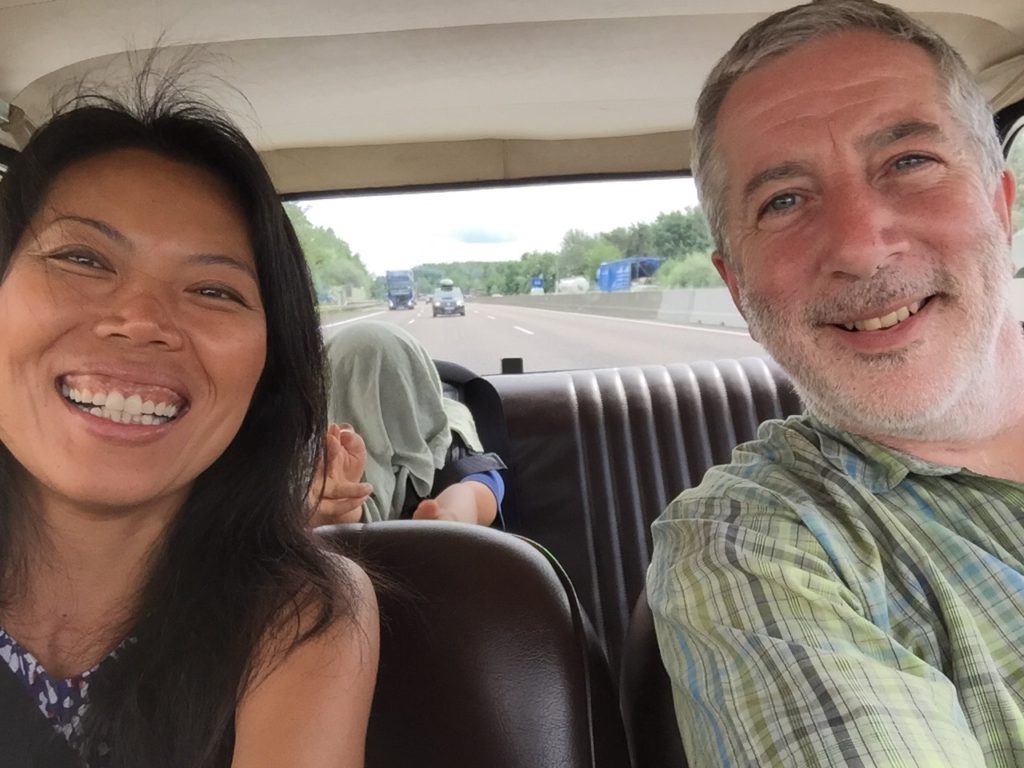 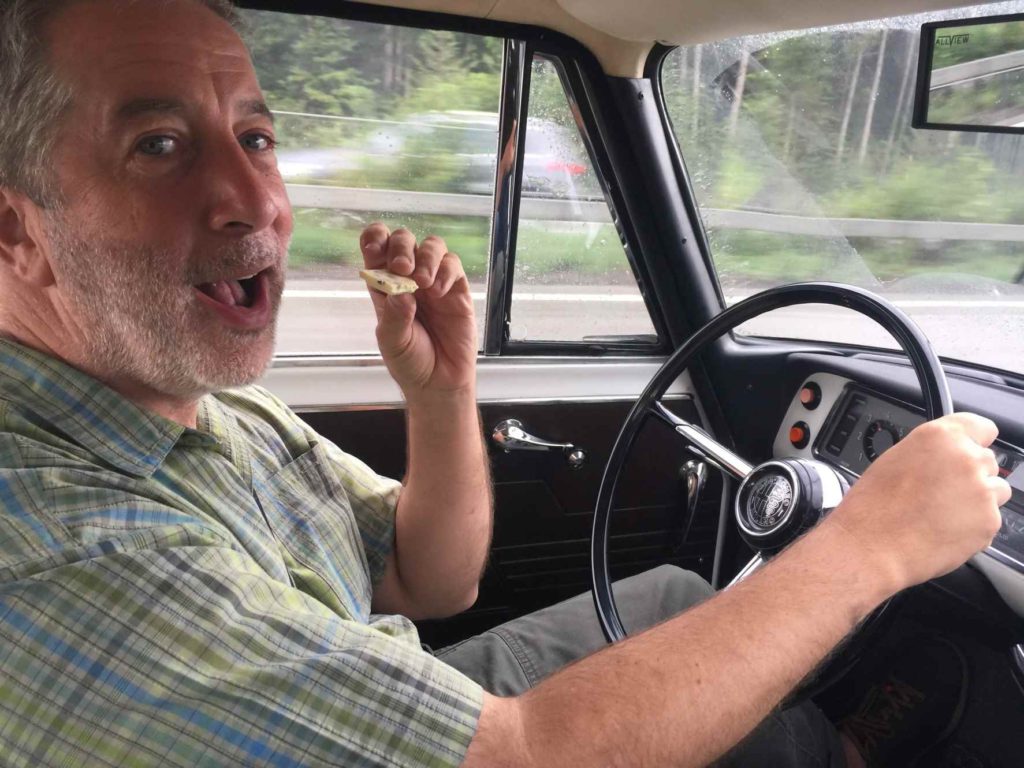 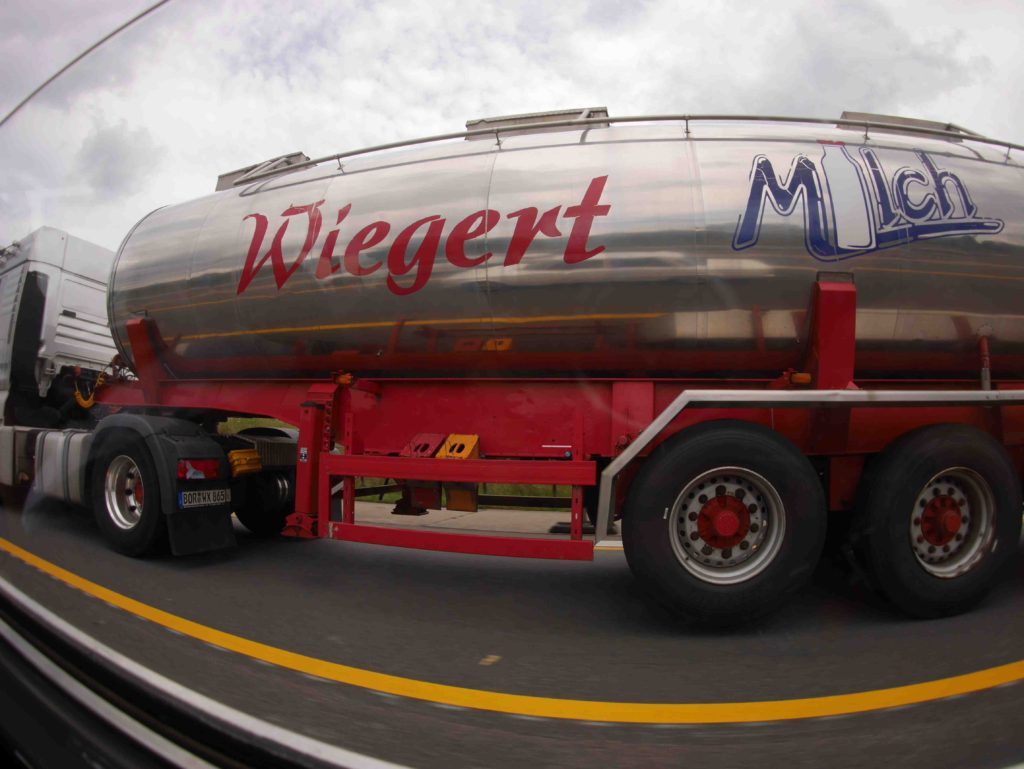 Jake took this picture of our reflection in the milk truck. 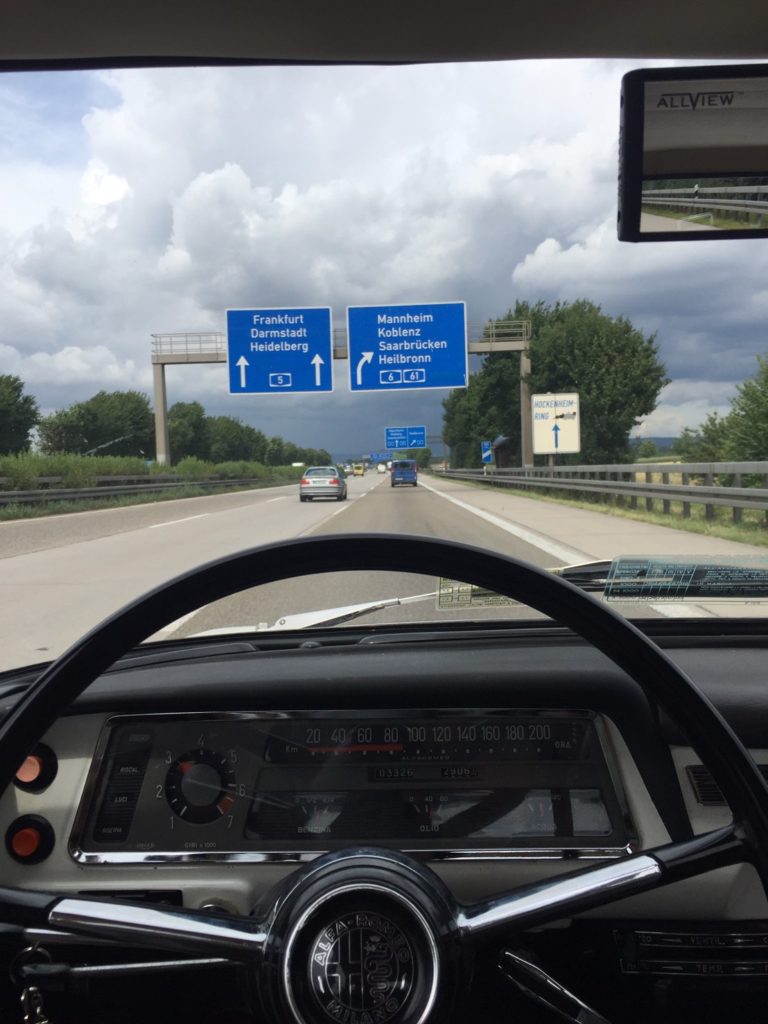 We are closing in on Darmstadt.

We stayed at the Hotel Jagdschloss Kranichstein.  Try saying that 5 times.  It was a truly world class hotel, huge modern rooms, and a bed from heaven. 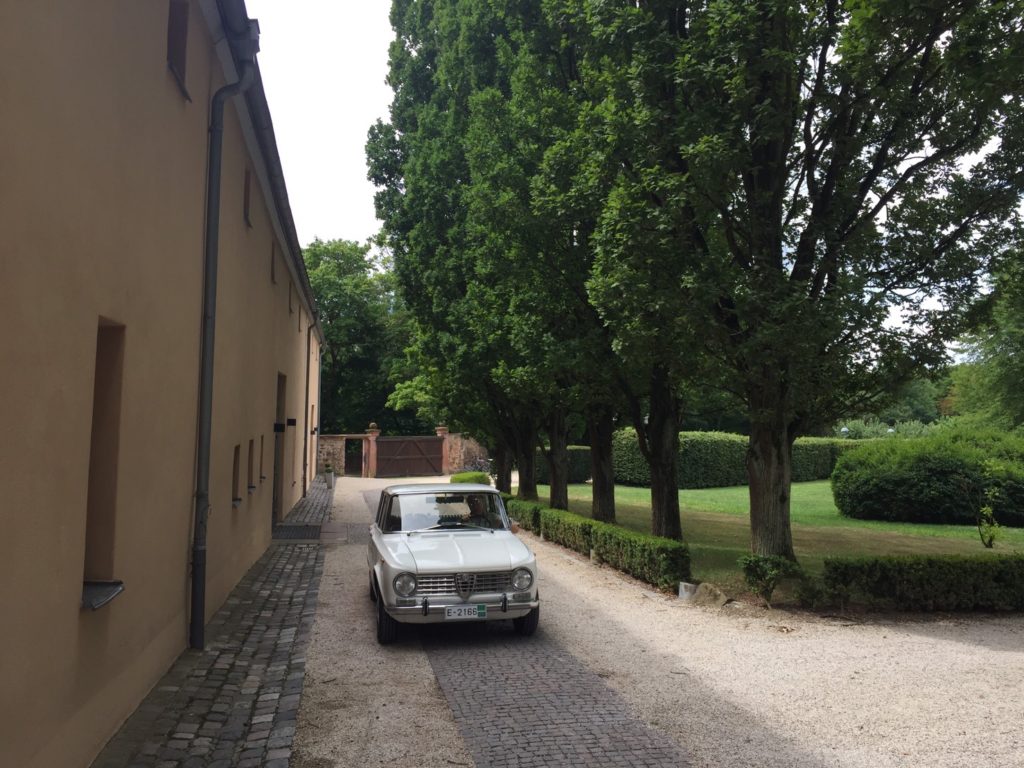 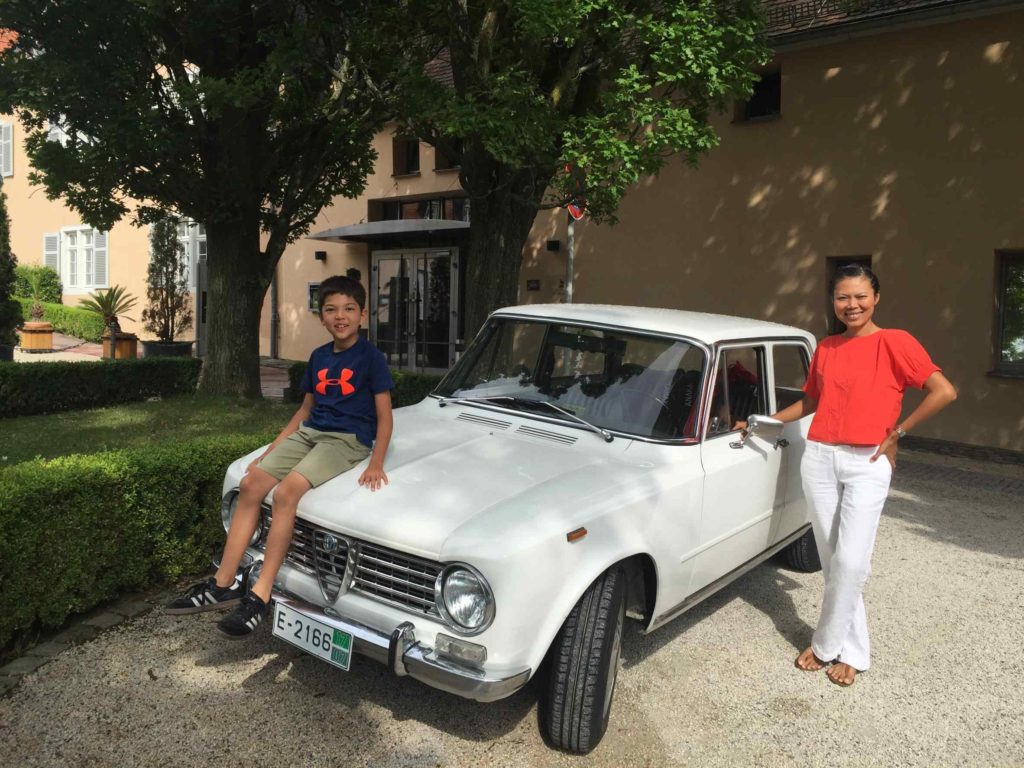 Hotel entrance, where you unload the bags.

Aey’s sister and some cousins live in Darmstadt.  We were to meet at the Darmstadt Ratskeller Hausbrauerei.  That is a code word for “beer-a-plenty”. 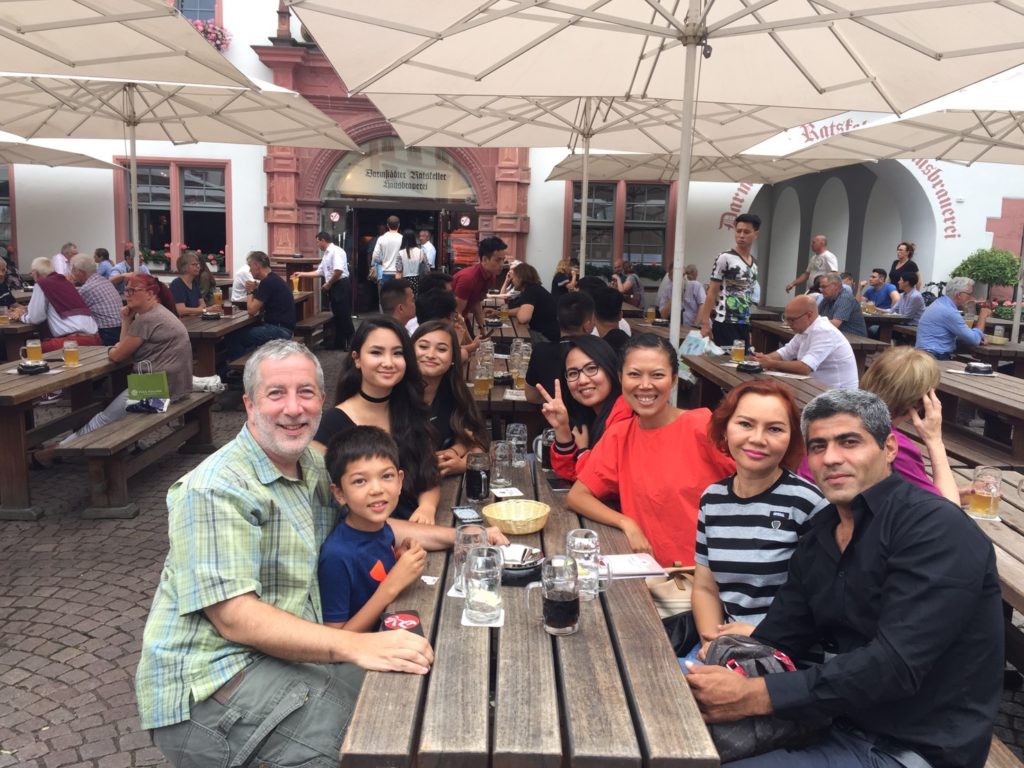 Aey’s family in Germany. Amazing how people move all over the world. 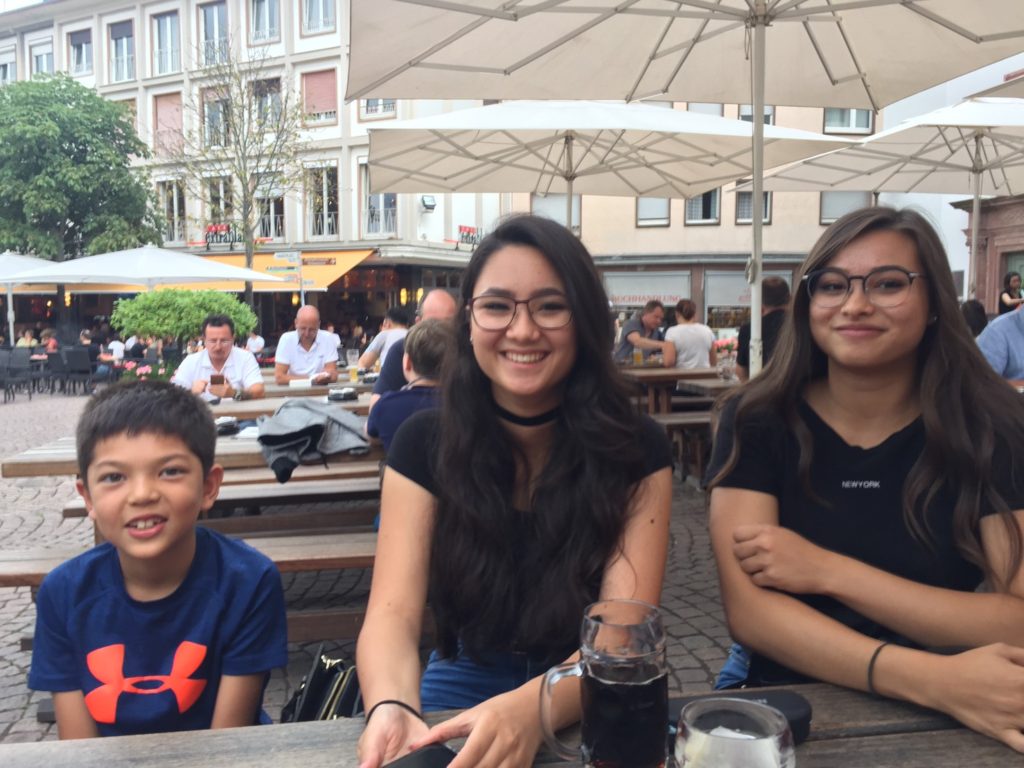 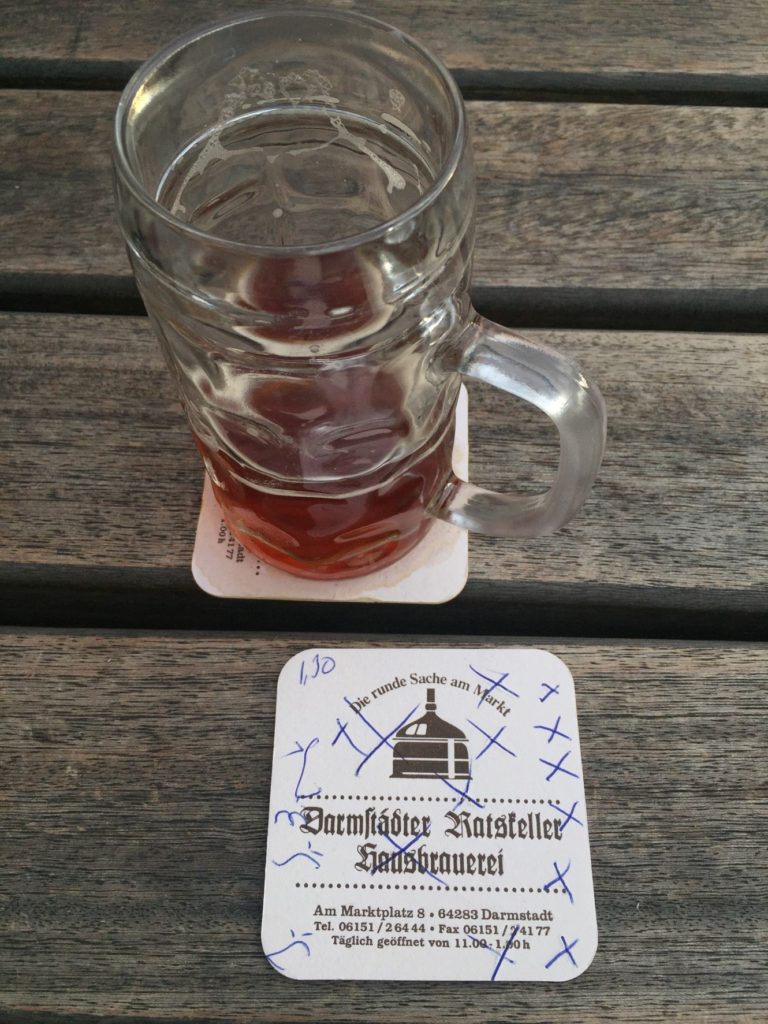 They keep track of your beers with ‘X’ on the beer coasters.

Well, there you go.  Our immersion into German culture was complete and we checked out of the Hotel Jagdschloss Kranichstein in the morning. 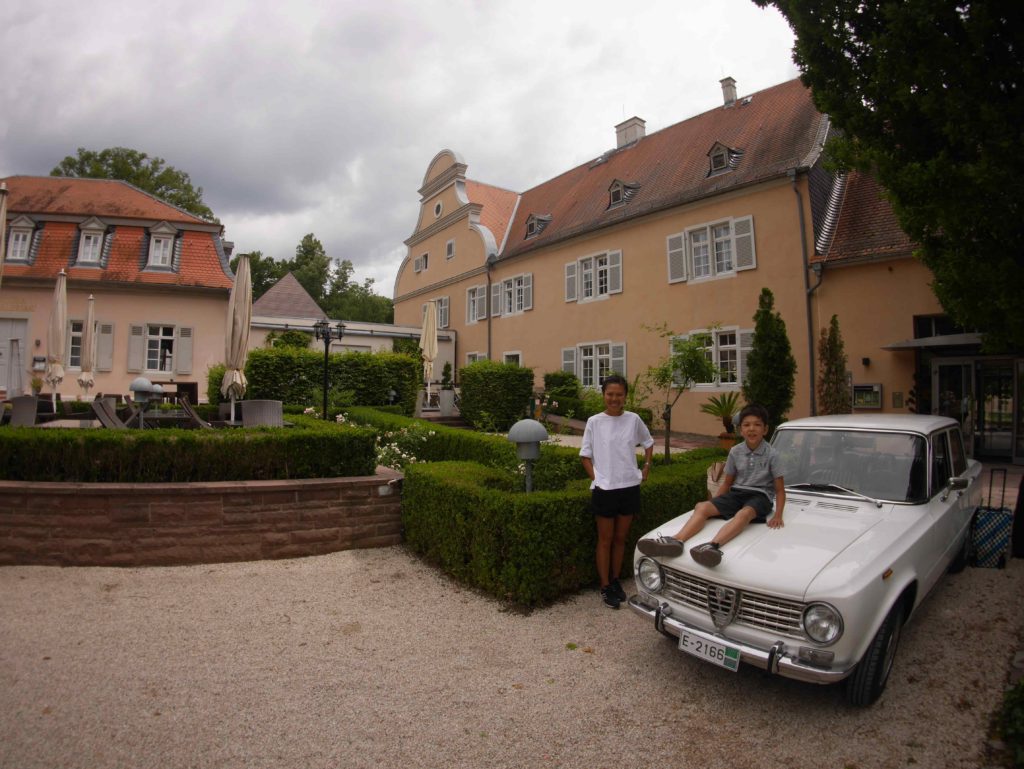 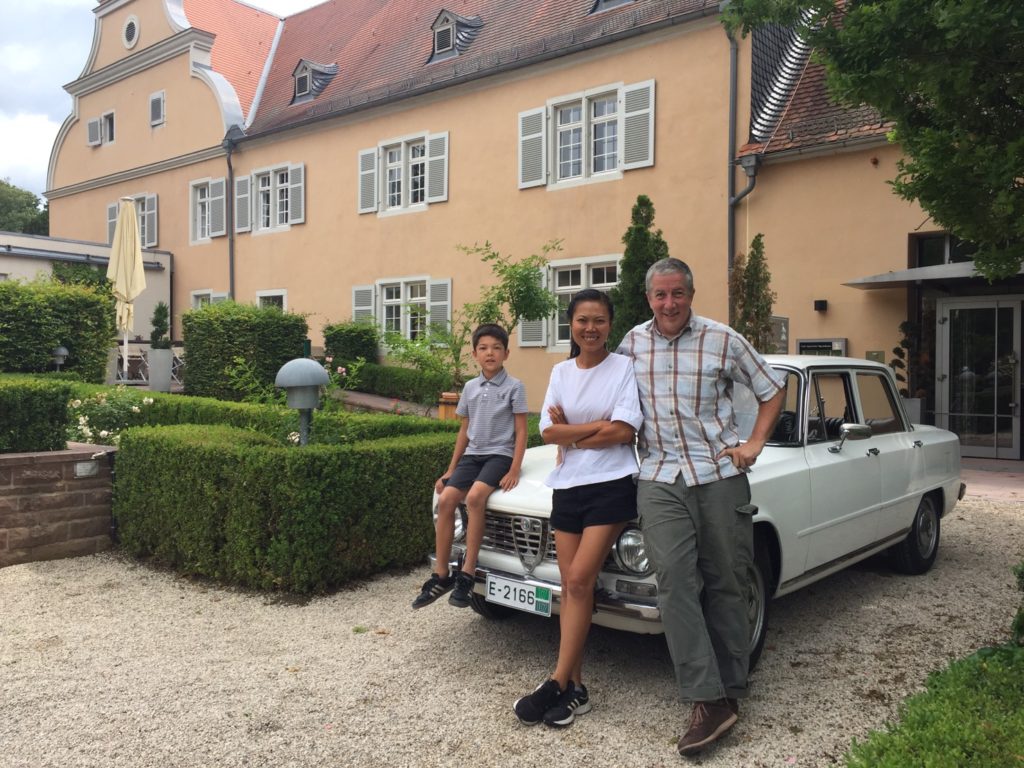 Hotel guest allowed me to get into the picture.

The drive to the Netherlands was easy.  Straight.  Flat.  Good friends were at the end of the rainbow.

On this trip, was the only time I got stopped by the police.  2 times, both on this morning drive.  In Germany, I ran a yellow light.  They told me to stop on yellow, and let me go. At the Netherlands border, I was pulled over for no apparent reason and was let go with a wave and a smile. I was surprised I did not get pulled over more, as I have an odd car and strange license plates. 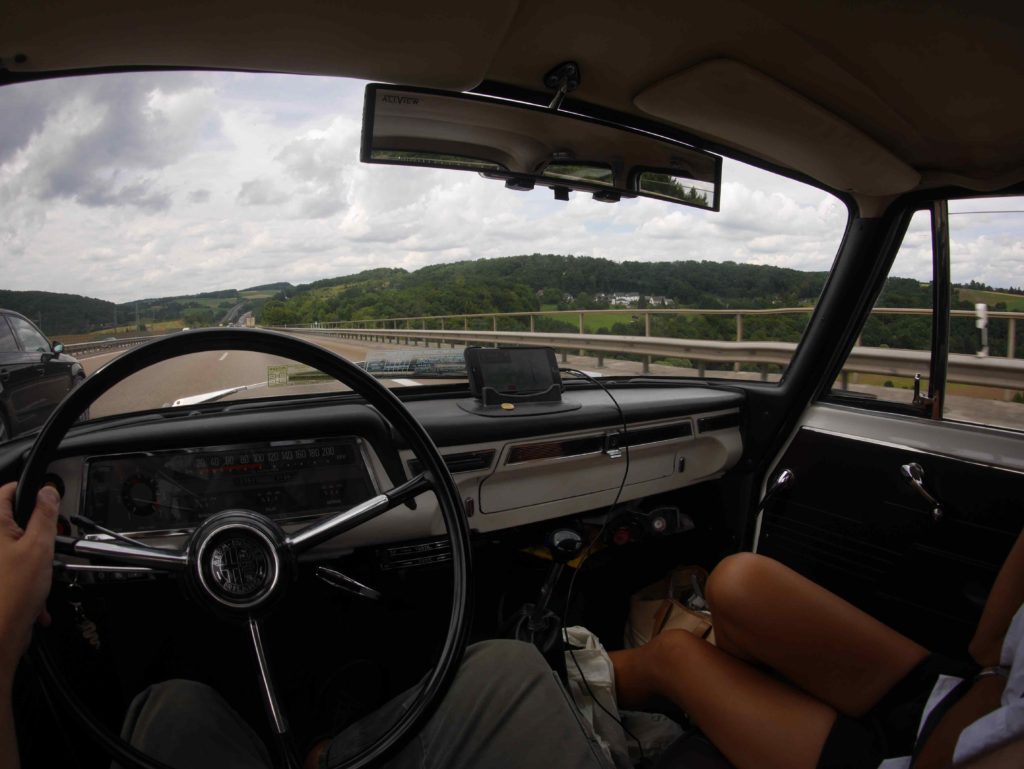 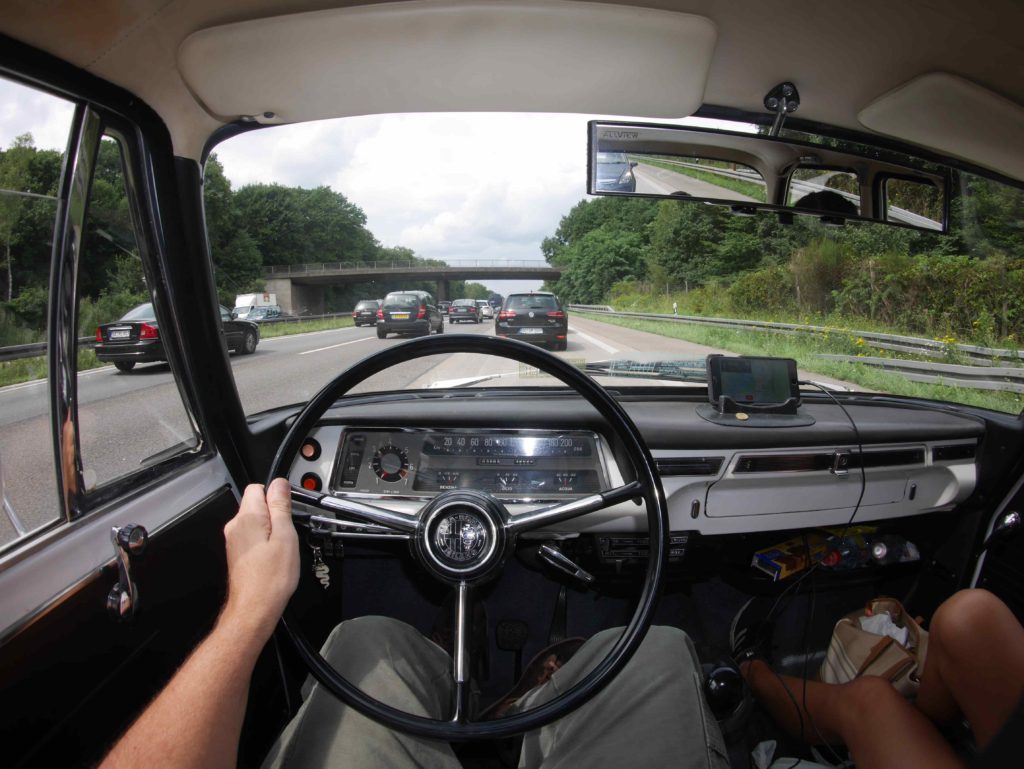 Traffic on the highway. Completely stopped. 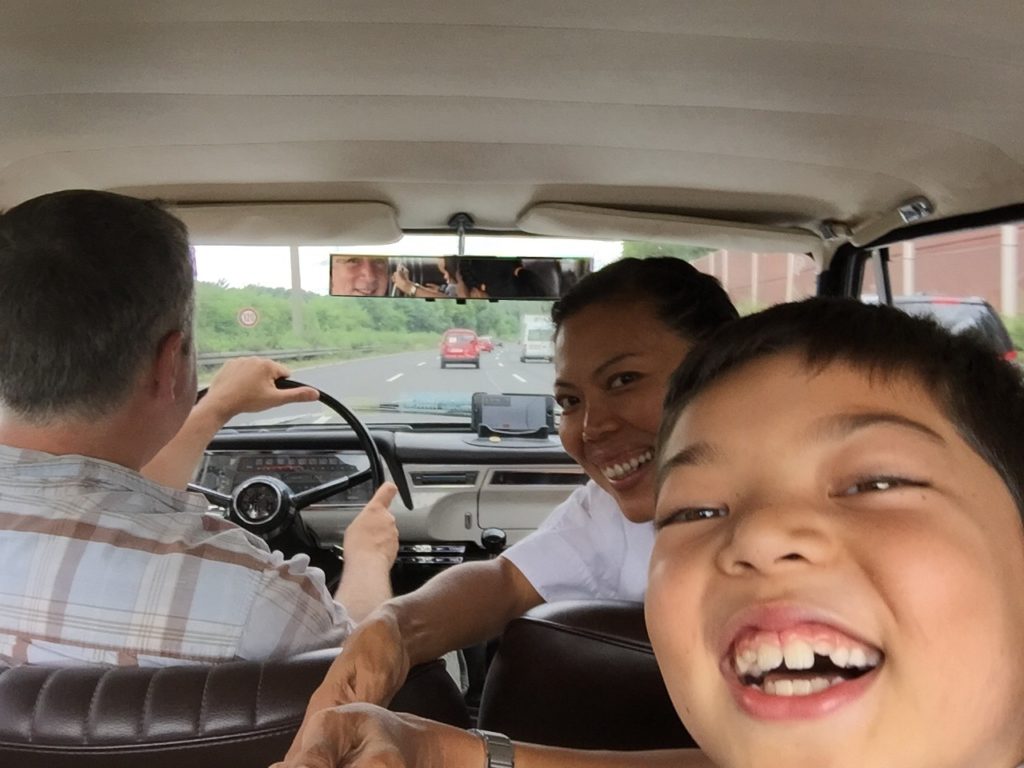 Jake and Aey having a blast.

Remember how I missed the Porsche museum?  I was given a little gift, while driving on the highway.  We spotted a perfect Porsche 356. 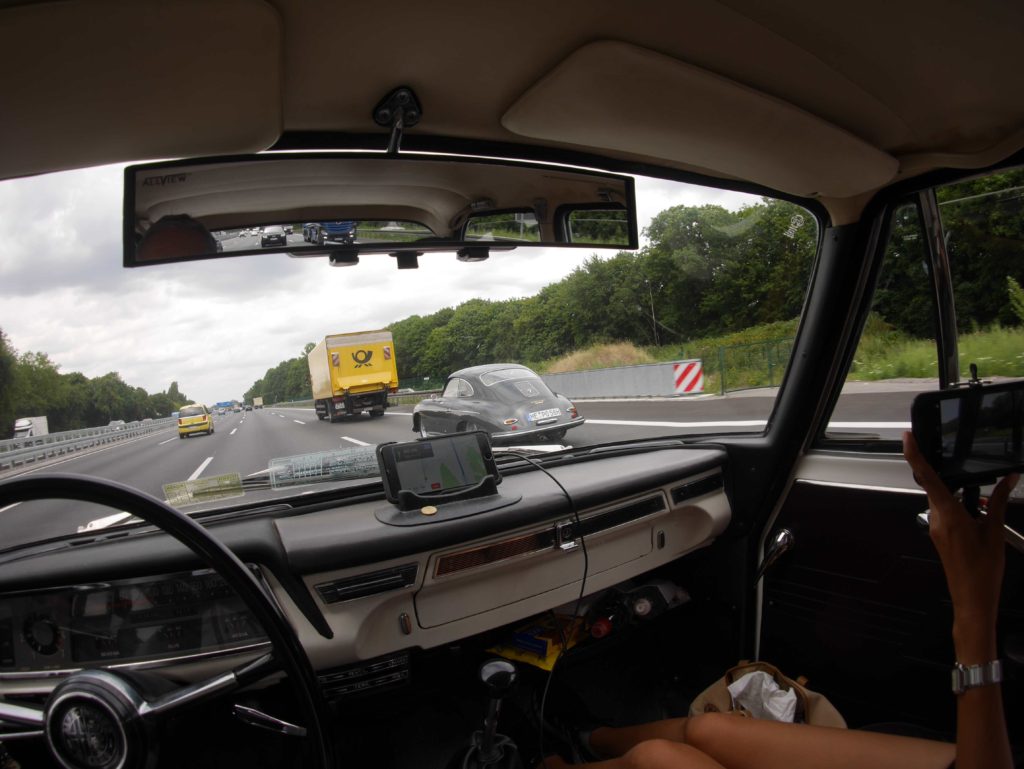 A Porsche 356 spotted on the Autobahn. 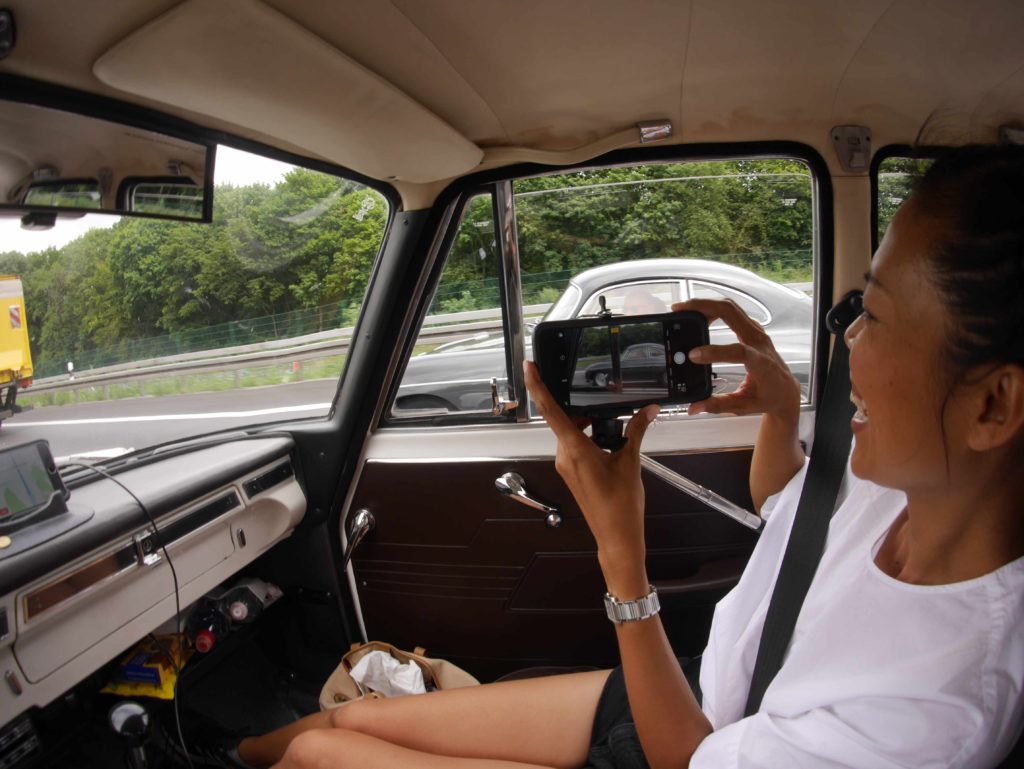 Nice drive, and uneventful.  With an old car, I am happy to make it to the destination.

Jake has a best friend in a soft toy.  The name is ‘Now’ and that is the Thai word for ‘filthy’.  Here is ‘Now’ posing with the Alfa Romeo. 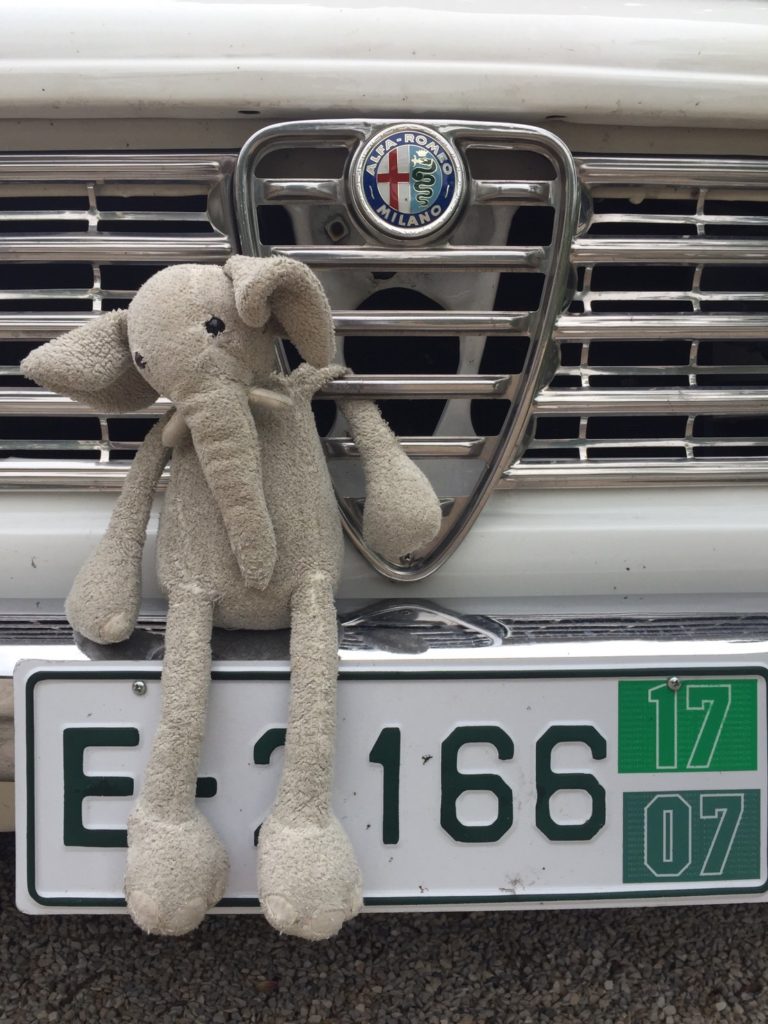